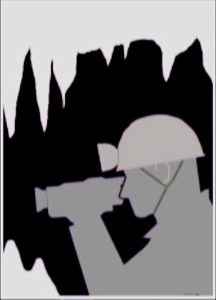 I was born in Grimsby shortly before the start of the second World War. Heavy bombing of the docks and town forced the family to consider a move to the outskirts, and we were fortunate to find a place in a semi-rural area close to fields, trees and a beck. Our parents allowed my younger brother and I the freedom to climb, explore and roam for hours on end, which sparked a lifelong love of the outdoors and adventure.

In 1958, having qualified as a pharmacist it was time to undertake compulsory National Service, and I soon found myself in demand in charge of a busy medical store and dispensary in a hospital in the Malayan Jungle. Following demob I was based in my home town on pharmacy relief duties, before setting out on a lifelong career in retail pharmacy management.

In 1972 I moved with my wife and family to Nottingham, which is in easy reach of the Peak District National Park with its wild open spaces above ground, and an abundance of caves and mines below. It was while walking around Matlock Bath one day that I fortuitously came to caving. It was a hot day and the shade of of the nearby Mining Museum beckoned. I popped in and I soon found myself signed up to an upcoming trip down an old lead mine; I was 51 years old . This was in 1986, and 1500 underground trips and 26 years later  I eventually hung up my caving boots and called it a day – but it had been an exciting and fulfilling journey during which I had experienced fear, excitement, band friendship.

In 1991 I was setting out for a caving holiday in County Clare in Southern Ireland together with members of the Masson Caving Group and leader Paul Chandler. Also in the party was my eldest son Andrew who decided on the spur of the moment to purchase one of the early Sony Handicam camcorders to take on the trip.The camera’s portability and ability to capture the atmosphere and sounds of the cave were so impressive that shortly afterwards I purchased my own video camera; the rest is history.

As a photographer I found the techniques for video very different, which will be clear to anyone watching my early efforts. I eventually plucked up courage to enter a few films in video competitions held at the annual Caving Conference. But it was not until I met and was tutored by fellow caver and video enthusiast, Buster Wright,  that I began to see the potential and importance of skilled editing and keeping my films short.

With the help and support of my fellow club cavers I was able to go on to win prizes at several national video events including the Film and Video Institute annual competition where my entry gained me an LACI and membership of the Institute. At the Hidden Earth Conference for cavers I also won first prize and in 2012 was awarded the coveted Giles Barker Award. The quality of my work has been recognised by the BBC and ITV who have featured clips from my films on television programmes such as The One Show and Countryfile.

During the “video years” I also turned to cave (and mine) conservation and was appointed as Derbyshire Caving Association’s (DCA) Conservation Officer in conjunction with Natural England and help from caving colleagues I was tasked to monitor the condition of all the caves and mines in the Derbyshire and Peak District SSSIs. We were the first area in England to have the condition of all its cave sites recorded as “ excellent” and in 2001 I was presented with a certificate and a cheque for £1000 to go towards further conservation work. I retired from the DCA in 2012 having also authored and co-authored several published conservation audits and management plans.

At the age of 86 I have long since hung up my caving boots but still maintain contact with my old friends from the caving world and retain membership of several caving clubs. I was recently prevailed upon by my grandchildren to take them underground – they were thrilled and excited but as I staggered painfully into daylight I knew that this was the fabled “one last trip” for me.